The traditional attire of the Igede is the Ogodogodo material which is a fabric consisting of interwoven white, black and blue stripes. This Igede style is recognized as a central element of the people’s culture. The colour combination is unique, which is why it is not only used as the Igede traditional wedding attire and special occasion clothing, but also for everyday wear.

Who Are The Igede People?

The Igede tribe being the third largest ethnic group in Benue state has a rich cultural heritage that they have held onto to date. Igede people are densely populated in Obi, Oju, Gwer, and Konshisha Local Government Areas Of Benue State. Also, some parts 0f Igede Land spreads across Cross River State and other Southern regions of Nigeria.

Various aspects constitute the exquisite cultures and traditions of the Igede people; from their marriage traditions, cultural attires and food to their dance and music. It was until the 1990s that the Igede people became pronounced in Nigeria. Before that, Igede culture has been alive and in existence.

Marriage forms a vital part of the cultural heritage in the Igede land. With the existence of many forms of marriage all over the world, the tribe has remained loyal to one type of marriage. This is the marriage by bride price.

Here, the groom and his family visit the bride’s home with gift items to communicate his marital intentions to his wife-to-be’s family. During the visit, the girl’s family makes requirements of a specified bride price which he is to pay on the next visit. Between the duration of the first and second visit, the bride’s family makes some research on the suitor’s family and their background.

Asides from marriage by bride price, some young women do elope with their lover and live as husband and wife, though not properly wedded. This is known as Elopement marriage. There is also marriage by abduction or forced marriage where the bride is caught by her suitors either on the road or market, then she is helped captive before negotiating the marriage rights with her parents.

There is always gun firing as part of the marriage rites, to inform the entire village that the lady in question is already someone’s wife. Also, to keep other prospective suitors away from her. Asides from marriage by bride price, none of the above marriage forms is still functional in modern-day Igede land.

You can’t fully explore a tribe’s culture without knowing their traditional attire. The Igede native wear is the white, black and blue striped Ogodogodo fabric. It is this same material that is used as the Igede traditional marriage attire. These stripes can be made on silk, George, damask, or print fabrics

There are varieties of ways that the Ogodogodo material can be fashioned, which is why we have pictured 40 photos showing these unique styles.

Igede Traditional Attire For The Bride

Ogodogodo for the women can be made into skirt and blouse attires or blouse and wrapper. Some use two wrappers. One to tie their chest and the other around the waist. There are also traditional Igede beaded accessories that can spice up the look of your outfit. You can never go wrong with the white, blue, and black striped necklaces, bangles, and waist beads at your wedding event. A small piece of the wrapper can be used as the headgear or it can be transformed into a Gele style.

For the men, the Ogodogodo fabric can be sewn into Agbada, Kaftan, or Senator Styles. Accessories for the men are the Ogodogodo caps, walking sticks and beads. All of these help to accentuate the rich cultures of the Igede people.

Other Pictures Of Igede Traditional Attires 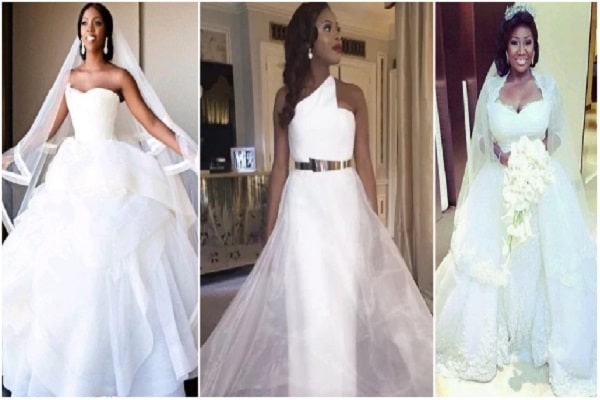